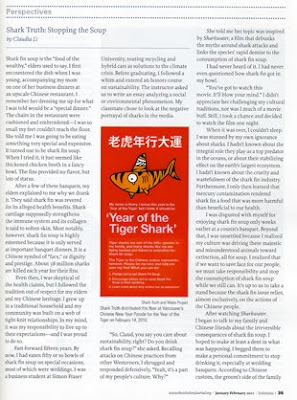 Looking through the latest issue of the Solution Journal, I came across an interesting article containing some home truths about Shark Fin Soup. To read Claudia Li's article please click here and to find out more about the film Sharkwater please visit the website.
Posted by Ultimate Holding Company at 06:10 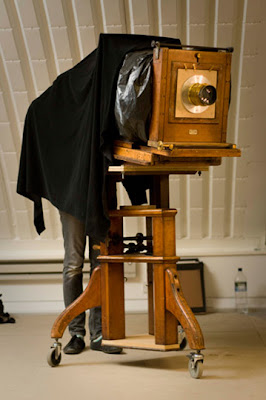 Nineteenth Century studio plate camera used by Anatomy Projects to photograph the Ambassadors.
Photography, Tom Bing.
Artists Gavin Parry and David Penny of Anatomy Projects have been collaborating with UHC over the past two years creatively documenting art projects such as extInked and EXAM.
In November 2009, they were commissioned to create a collection of portraits of the one hundred Ambassadors as part of the extInked project using a restored 19th century studio plate camera. The intention was not to make a document of the tattoo but to create a portrait of the individual, as a part of a shared experience of the social experiment. 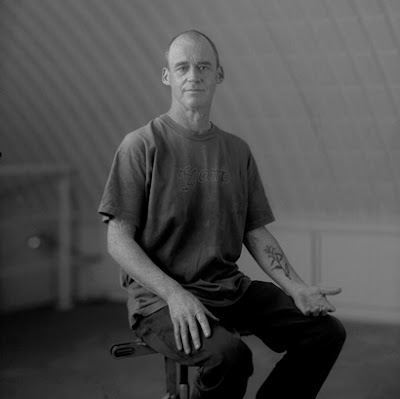 The portraits were exhibited at the extInked reunion 2010 as part of the exhibition at Castlefield Gallery, Manchester entitled 'A Horse walks in to a Bar'. The portraits will also be exhibited at various locations around the UK throughout 2011 - 2012 as part of the extInked UK tour, further details to be announced shortly.
To see a sample of the beautiful portraits please visit the Anatomy Projects website.
This collaboration between UHC and Anatomy Projects has been made possible through the financial support of MIRIAD.
Posted by Ultimate Holding Company at 12:51

extInked featured in Epoca Magazine, a weekly publication in BRAZIL!

Two weeks ago I was contacted by a journalist from Epoca Magazine, a weekly publication in Brazil who was interested in writing an article about the extInked project. To see the finished piece please click here.
However if like myself, you have not mastered the portuguese language please see my attempt at translating the article in to english below (I apologise now for any inaccuracy within the translation!):
Tattoos to save Nature
Over the years the environmentalists have thought of different ways to alert the population to the extinction of plant and animal species. They created posters, films, documentaries, billboards and web campaigns, and even tied themselves in public buildings to protest. Now a British company took the idea further, and tattooed on to one hundred volunteers, species in danger of disappearing in the UK.
The project was conceived by Ultimate Holding Company, an art and design collective. Called extInked (a pun on the word "defunct" and the word "ink" in English "ink"), the project began during a symbolic date: November 2009, the same year as Darwin's bicentenary. The initiative goes beyond ink and skin. "We wanted to make an artistic and sociological experiment," says Kate Houlton, coordinator of extInked. "The goal was to prove that our generation wants to save the planet, and is willing to take extreme measures to prove their passion."
Initially, we made a list of one hundred species at risk in the UK: birds, fish, amphibians, mammals, plants and fungi. Then the artist Jai Redman created an illustration of each species, following a style compatible with the records of Darwin. The illustrations were exhibited for a period of a month at a location in Manchester and people interested in acquiring a tattoo were asked to complete an application form. In it, they had to specify which animal they would like to tattoo of, and why. "We were shocked when on the first night, three hundred people signed up," says Kate. "Some species were more popular than others, such as the bees. Other species received less registrations, but none came without volunteer."
When it came to choosing the Ambassadors, the Ultimate Holding Company had another surprise, receiving more than five hundred applications. "We received entries from art lovers, environmentalists, scientists, teachers and people interested in tattoos. Their ages ranged from 18 years until 60," says Kate. One candidate had planned to pass their tattoo down through the family to their children and grandchildren when they became adults. Others wanted to become an ambassador for animals with which they identified, and there were others who just thought the species were beautiful.
The tattooing happened during the last weekend of November, but the project did not end there. The activities of each volunteer began after the pain of needles. Some of them worked with organizations in preserving the environment, others visited the natural habitat of their species. Now, the Ultimate Holding Company will be touring the extInked project as a visual arts exhibition around the UK throughout 2011 - 2012 showing the current work of the Ambassadors and how they and their new tattoos impacted other people.
"For now we will work with volunteers from the UK but we would like to expand to other countries," says Kate. "Our mission is to create a worldwide network of ambassadors." Maybe someday you can just tattoo a Brazilian species at risk of extinction, and cooperate with the project.
The photographs featured in the article are:
1. Huw Spanner and the White Tailed Eagle for which he is the proud Ambassador. Photo courtesy of Andrew Firth.
2. Jai Redman, Ambassador for the Smooth Snake. Photography, Tom Bing.
3. Black Grouse Tattoo. Photography, Jai Redman.
Posted by Ultimate Holding Company at 10:07